This World Database of all species of Foraminifera ever described (recent and fossil), is part of the World Register of Marine Species (WoRMS), a global initiative to provide a register of all marine organisms.

Searching the database (fossil and/or recent)

The default setting is to search the whole database of fossil and recent species. If you would like to only search the recent (living) taxa then tick the 'extant' box in the Taxon Search window.

Foraminifera (‘hole bearers’), foraminifers or forams for short, are a large phylum of amoeboid protozoans (single celled) with reticulating pseudopods, fine strands of cytoplasm that branch and merge to form a dynamic net. They usually produce a test (or shell) which can have one or more chambers, and are made of calcium carbonate (CaCO3) or mineral grains or other particles glued together. The tests are usually less than 0.5 mm in size, but the largest can be up to 20 cm across. Foraminifera are among the most abundant and scientifically important groups of organisms. The tests of recently dead planktic foraminifera are so abundant that they form a thick blanket over one third of the surface of the Earth (as Globigerina ooze on the ocean floor). Foraminifera are essentially marine and estuarine-dwelling protozoans living in all environments from the greatest depths right up to highest astronomical tide level and from the equator to the poles.

The importance of foraminifera comes from the use of their fossil tests in biostratigraphy, paleoenvironment studies, and isotope geochemistry. Their ubiquity in most marine sedimentary rocks, often as large, well-preserved, diverse assemblages, has resulted in their being the most studied group of fossils worldwide. Because recent foraminifera have attracted little interest from biologists, paleontologists have been forced to undertake most studies, including genetic research, on the living fauna.

This site has the following aims: 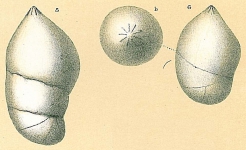 The list of currently accepted species-group names is at least 90% complete for recent species, but the taxonomy of many taxa still needs revision and newly described species will be added as soon as possible after publication, a task that will be undertaken continuously by the editors. Fossil genera and higher taxa are mostly complete but fossil species will take many years to add in. There is currently no broad consensus available for the higher classification of the Foraminifera. Here, the classification given in Loeblich and Tappan (1987 and 1992) is mostly used for calcareous taxa and Kaminski (2004) is followed for agglutinated taxa, but the higher level classification of Foraminifera is in a state of revision and has been updated to comply with the genetic sequence-based results to date of Pawlowski et al. (2013) and Holzmann and Pawlowski (2017). Further results of ongoing molecular phylogenetic investigations will hopefully help to stabilise the taxonomic system in the future.

A steering committee provides international oversight and fosters the compilation and rationalisation of the World Foraminifera Database.

The steering committee members are:

Enter data and make taxonomic decisions in the groups they have responsibility for:

Editors are responsible for entries, decision on validity of names. Corrections and omissions may be addressed to either editor.

Acceptance of a species in the database is an editorial decision, but we acknowledge such decisions need to be re-examined frequently in the light of new information. If you disagree with senior synonymy decisions or genus assignments, please let us have your well-argued-corrected assignment. Only the editors can add or modify the data, but anybody can upload images with identifications and location information, although this will be checked and can be modified by the editors

History of the World Foraminifera Database

Since then records have been added from Johannes Pignatti’s catalogue of recent foraminifera, many major atlases of Recent foraminifera and output from Ellis and Messina Catalogue of Foraminifera. We are aware that many taxa described since 1980 have yet to be found and added

Who described the largest number of recent Foraminiferal species?

The literature library currently contains ~9000 references, many of the older works are available as scanned PDFs.

The Photogallery currently contains ~6000 images linked to species records, mostly entered by Tomas Cedhagen from Brady’s Challenger volume and Cushman monographs, but also some other monographs.

Tasks to be done

The steering committee has identified the following tasks that could be undertaken to improve the usefulness and value of the Forams in WoRMS database. The tasks have been assigned to one of three perceived priority lists. We invite any worker who wants to make this database more useful by contributing to any of the tasks below on a voluntary basis, to contact the chair of the Steering Committee, Bruce Hayward by email.

Links to other Foriminiferal sites

To assist the beginner or the non-specialist we provide here a selection of links to foraminiferal websites for further information.

Usage of data from the World Foraminifera Database in scientific publications should be acknowledged by citing as follows:

If the data from the World Foraminifera Database constitute a substantial proportion of the records used in analyses, the chief editor(s) of the database should be contacted. There may be additional data which may prove valuable to such analyses.

Individual pages are individually authored and dated. These can be cited separately: the proper citation is provided at the bottom of each page.

The World List is a searchable catalogue of species and higher taxa names.

Navigating this catalogue starts with clicking on one of the choices in the menu, which you find on the top of each page

For each foraminiferal species or infraspecific taxon, accepted or not, there may be the following entries:

The records on higher taxa generally have the same structure as those of the species records. Not all of the above items already exist for all taxa entered in the database, but they will be added as time permits.